Jesus cares even for the little things. He heals a fever, not just the big things like blindness or paralysis. Sometimes we act like some things are below Jesus’s notice. We don’t want to bother him with the small stuff. But the bible says to pray without ceasing (1 Thess. 5:17). This doesn’t mean that we should be asking God for something all the time, because prayer is more than about asking for things. But its ok to bring the Lord your needs, no matter how small. He cares for you (1 Peter 5:7).

Jesus’s ministry is now kicking into gear, he is healing a lot of people. But he seems to not want the word getting out about himself. He avoids gathering attention. He even rebukes the demons from telling who he is.

Consider for a moment. Why do you think that is?

One reason he avoided attention was that his fame made it harder to reach people. The people would mob him. Many of those people were simply gawkers, there to see something strange, not really interested in what he had to say. In John 2:23-24 it says that “many people saw the signs that he was performing and believed in his name. But Jesus would not entrust himself to them, for he knew all people.” People are fickle. When he entered Jerusalem a few days before he was arrested, the people were cheering him and laying their cloaks in the road for him to ride over like a returning king, but just a few days later, they were shouting for him to be crucified.

He also spent most of his time sowing into just a few people, those who build his church after he ascended into heaven. Jesus knew that his season of ministry on the earth was only for a short time, and they would carry on after he ascended.

Jesus also wanted to go to where people were and meet them in their lives. He had to leave the crowds to do this. He had God ordained appointments with people, many of whom might not have ever considered going to listen to a holy man.

This rejection of fame really carried on throughout his ministry. He could have come and just announced, “I’m the Messiah, believe in me!” But he often was cryptic in his messaging. He implies that he is the messiah and the son of God most of the time rather than just saying it. He tries to keep many of his miracles quiet.

This partly has to do with the people’s expectations. They wanted a king. Many were most concerned about political freedom. That is freedom from the oppressive Roman empire. They were happy when he fed them and healed their sick. But they ultimately rejected him. They wanted a messiah, but they didn’t want the messiah that he was offering.

They wanted God on their own terms. Instead of accepting him for who he is. We can have this problem as well. When people say God, or even Jesus, they may have different ideas of who he is. Have you ever heard someone say: my God would never do that? Or: I don’t want to believe in a God who would do that? It is very easy to let our own predispositions, or our preferences influence who we think God is. But when we do that we are in danger of replacing God with an idol of our own making.

How do we keep from replacing God with an idol?

Instead of letting our idea of God be determined by what we think he should be like, we must look to the bible, to what he actually said and did. We must let the scriptures inform us, instead of informing them. It is important that we read the bible and let it change us. We must accept Jesus as he is. Sometimes, that is not what I’d prefer. There are scriptures that I personally wouldn’t have chosen to be in the bible. But I don’t get to pick and choose. I must take the scripture as it is and let it change me.

Let me give you an example. A lot of people claim to believe in God in this country. But the Barna group, a group that surveys people on their beliefs, discovered that what many people believe in is not the God of the bible. They termed this very widespread believe as Moral Therapeutic Deism. Let me break down what that means.

Let’s start with the deism part. This basically means that people believe that God created the world, but he is kind of distant. We can’t really know him personally. He doesn’t really get involved in the day to day of our lives. The moral part means that people believe that God just wants them to be good people. That is all that God really wants of us. If our good outweighs our bad, then we are ok. The therapeutic part means that God just wants you to be happy. He is there is case get into a lot of trouble, but otherwise stays out of your life.

This may sound ok at first, but it is complete opposite of Christianity. There are some seeds of truth in it. God did create the universe, but He is not far off. Jesus came to this earth, so that we could know him. He sent his Spirit to live inside of us. Christianity is about a relationship, more than a religion.

There is a seed of truth in the moral part as well. God does want us to live holy lives. But the bible teaches that we are all sinners. All have sinned and fallen short of the glory of God. We need a savior, Jesus, to wash us clean. And beyond that, we need his Holy Spirit in us to change us and help us live holy lives.

And it may sound harsh, but God’s ultimate goal for you is not for you to be happy. His ultimate goal is that you become spiritually mature. This is so much better than just being happy. My kids would rather just play all day than go to school, but if they don’t learn to read, or write, or get skills, then ultimately, I have failed them as a parent, and they will have a terrible life. I love them, so I prioritize things above their momentary happiness that are more important. God is our father. He loves us, and sometimes he lets us go through hard things. But ultimately, he works everything for our good.

The point of all this is that: We must accept Jesus as who he is. We must let the bible determine our world view, not the other way around. He wants our hearts, not just our allegiance. 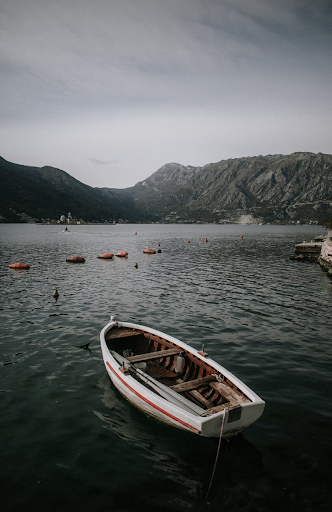 This probably was not the first time that Simon had met Jesus. We read in the other gospels that his brother Andrew was a disciple of John the Baptist, who in turned followed Jesus. Andrew brought Peter to see Jesus. Jesus renamed Peter Cephas, which means rock. It is also likely that he had already attended the wedding at Cana where Jesus turned water into wine. So he had heard Jesus teach and he had seen miracles. But this is the moment that things change for Peter.

Peter obeys Jesus even though he doesn’t really believe they will catch anything. This act of faith in Jesus sets everything else off.

When Peter sees the miraculous catch of fish he is struck in this moment with revelation. Suddenly, everything becomes clear. He is standing before the master of the universe. Jesus commands the fish in the sea. He speaks the word of God with authority. This is the Messiah. The Son of God. It is a moment of epiphany.

Realizing who Jesus is makes Peter recoil. He is suddenly struck by his own sinfulness. He sees clearly who Jesus is, and that causes him to see clearly who he is. His sin is overwhelming. If we could really understand the weight of our own sin, we would all do this same thing. The bible teaches that when Jesus returns everyone will fall to their knees before him and confess that he is Lord. In the presence of God, it is impossible to be cavalier about sin.

But Jesus says, “do not be afraid.” Peter was rightly afraid. He was a sinful man. Sin leads to death. Evil needs to be punished. But Jesus had a plan to deal with all that sin. All of Peter’s past, he was wiping away. His message to us is the same: do not be afraid. He offers forgiveness to all who come to him. We don’t have to be afraid because the punishment that we deserved was laid upon him.

We are here to build his kingdom. The scripture says that we are his workmanship, and he has prepared in advance good works for us to do (Eph. 2:10).

Become a Christian is not about agreeing to a set of beliefs or saying a prayer. That is a start. But it is more like starting a journey. We walk out our salvation with him. It is not enough to just get started, say the prayer, “get saved”, and stop there. When you become a Christian, you are giving Jesus everything. Your life. Your future.

Jesus said, “whoever wants to be my disciple must deny themselves, pick up their cross and follow me.” If you are going to be a follower of Jesus, then you must come to this understanding: your life is not your own. It belongs to Jesus.

Consider this for a moment. Have you asked Jesus what he wants you to do with your life?

Consider Peter. He could have lived the rest of his life out as a fisherman. It would not have been a bad life. There is dignity in work, whatever the kind. There is nothing wrong with humble work. But what he got instead was so much more fulfilling. He led thousands of people to Jesus. He brought people out of darkness into light. He worked miracles. He became one of the first leaders of the church. He got to personally know the Messiah. He did things that will have eternal consequences.

It may seem scary to let Jesus determine the course of your future. But as he said, do not be afraid. Trust in Jesus. Trust his character. Trust his goodness and mercy.

Posted by Quarterlife at 10:50 AM No comments: